In one week, my first non-fiction book for children, Anne Frank's Chestnut Tree, will be published. Creating it was one of the greatest writing challenges of my life. I wrote about the experience for Shalom Magazine and am reposting it here with permission. 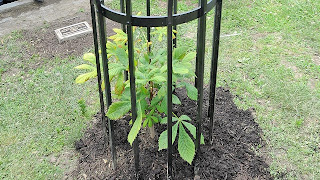 A sapling from Anne Frank's Chestnut Tree was planted on Boston Common in the summer of 2013.
(Boston Herald photo)

It’s utterly impossible for me to build my life on a foundation of chaos, suffering and death. I see a world being slowly transformed into a wilderness, I hear the approaching thunder that, one day, will destroy us too, I feel the suffering of millions. And yet, when I look up at the sky, I somehow feel that everything will change for the better, that this cruelty too will end, that peace and tranquility will return once more.  -- Anne Frank, 1944

The most challenging thing I’ve ever written was only one thousand words long. I write for young children, so I’m familiar with the challenge of keeping language simple and concise while also making it interesting. But in 2011, I received a call from my editor at Random House asking if I’d like to write an early reader about Anne Frank. I had written an early reader before, I had a background in Jewish Studies and had already published one Jewish interest book for children, so why wouldn’t I want to tackle this? But I didn’t say yes right away. The publisher wanted a book for early elementary school students. I wondered, how could someone explain Anne Frank to children without delving deeply into a complicated and dark time in history? Was I prepared for the enormous responsibility of writing a book that could be a child’s introduction to the Holocaust? Was it possible to be both honest and gentle in writing about such terrible subject?  And finally, how could I say anything about Anne Frank’s experience that she hadn’t said better herself?

I thought about the first time I learned about the Shoah, in a Hebrew School class in the 1980s. The lesson felt abrupt and dramatic, fascinating and confusing. The teacher tried her best, I believe, but a good book written for children might have helped her and helped us to better understand in a way that was appropriate for our age. Since that time many more children’s books have been published about the Holocaust. Some are very good. But there isn’t much out there for younger students about Anne Frank. I first read The Diary of a Young Girl when I was in middle school. And as with so many children before me, I felt like Anne was talking to me. Her voice made history real in a way that the photos and facts and numbers I’d been taught did not. I thought that if I could use as many of her words as possible, I could, perhaps, write a worthy book for children who were still too young to read her diary. Perhaps Anne could speak to them the way she had spoken to me.

I had one thousand words. I couldn’t use complex vocabulary. I had to keep clauses to a minimum. I could have no more than thirty characters in a line and no more than twelve lines on a page. When I explained my project to people they thought it might not be possible. In the end, it helped that I needed to choose an “angle” -- a way in to Anne’s story. Over and over, in her diary and stories, Anne returned to the agony of being shut inside and the power of nature to give her courage, to ease her suffering, and to help her overcome despair. She wrote about the attic window where she was able to see a sliver of sky and the branches of a chestnut tree. The tree, I learned, had become a symbol of hope to visitors of the Secret Annex, which is now the Anne Frank Museum. It had a story of its own, and its saplings, planted around the world, have come to represent Anne’s legacy. (Just this June, one was planted on Boston Common.) This was an aspect of Anne’s story I hadn’t seen in another book. It was a way to talk about Anne’s feelings that children might understand.

In researching and writing Anne Frank’s Chestnut Tree, I also drew on my background in Jewish Studies and my experience teaching in Jewish classrooms. I grew up in Brooklyn, NY, where I attended a Conservative synagogue. When I was fourteen, my parents moved to Falmouth, MA, where we became members of Falmouth Jewish Congregation, and I became active in NFTY. At Brandeis, I studied Near Eastern and Judaic Studies, along with English and Creative Writing. For graduate school, I attended Harvard Divinity School, where I focused on women in religion. I’ve been a teacher at several Hebrew schools, and spent time as a synagogue’s Assistant Director of Education. I found that my reading over the years had already immersed me in Jewish History and given me an understanding of Anne Frank’s era, while my classroom experience helped me to think about how children might relate to Anne’s story and how teachers might be able to use my book in the classroom.


As Jewish educators and parents we find that we must, at some point, introduce our children to the reality of the Holocaust. I hope that in focusing on something a child can imagine -- being shut indoors and longing for outside -- I have written a book that will allow children to empathize with Anne, a book that is both honest and gentle, and a book that is true to Anne’s view of the world.

Posted by Jane Kohuth at 8:49 PM No comments:

Jane Kohuth
JANE KOHUTH grew up in Brooklyn, NY, filling notebooks with poetry, journal entries, and unfinished novels. She graduated from Brandeis University with a degree in English and Creative Writing and from Harvard Divinity School with a Master’s Degree in Theological Studies. Though not all of what she’s studied makes an appearance in her work (no Biblical Hebrew yet), she finds that poetry and picture books have a lot in common. She also loves combining her interests and writing books that feature Jewish characters and themes. She has worked as a Jewish educator, a children’s room library assistant, a writing teacher, and a children’s bookseller and organizer of author events. Jane now lives and works in her house in the historic district of Holliston, Massachusetts with her husband, son, and black cat. She loves knowing that her house was built in 1871, making it the new kid on the block. Jane is the author of the children's books Ducks Go Vroom (Random House), Estie the Mensch (Random House), Duck Sock Hop (Dial), Anne Frank's Chestnut Tree (Random House), and Who's Got the Etrog? (Kar-Ben). She is represented by Teresa Kietlinski at Bookmark Literary.